skip to main | skip to sidebar

This changed my life

When i was a youngster, about 6th grade, i got my first taste of Punk Rock. Before that i was into NWA, DJ Quick, Ghetto Boys, Metallica, Slayer ETC... i guess generally cooler stuff, but that is a different story and beast. My friends older cousin let us borrow the first Ramones tape, Bad Brains "I against I", Misfits "Evelive" and the first DRI tape. These things were in constant rotation and i was becoming fully engulfed.
My Aunt was living with me at that time and she was dating this guy and the only thing i can remember about him was that he wore size 27 jeans, they were really tight, so i assumed he was a Cowboy or something. One day he comes up to me and says:
"So, your Aunt tells me you are getting into Punk Rock"
and i said
"yeah"
then he says
"that is great, I have a couple tapes for you"
So he gave me two tapes, i recently found one the other day, and this is the cover of it. 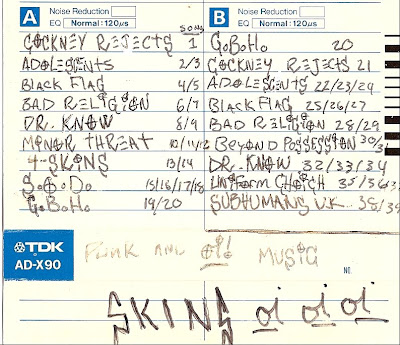 So, now, since i was the tender age of 10 years old, i had no prior knowledge of what "Skins oi oi oi" could have meant. I started to think it was a racist tape or something, i didn't know any of these bands, and there was no internet or anyone else that could explain it to me. I fell in love with this tape and listened to it multiple times a day though, and was torn thinking that some of it was like magic to my ears but that it could be racist. I didn't know what to do.
One day i went to the local record store and mustered up the courage to ask for one of my favorite bands on the tape, which in my child's mind (and also since he neglected to write an "E" like a normal person) was called ADOLF SCENTS. Keep in mind this was a great internal struggle since i am Jewish but was so intrigued by this music. Anyway, i went to the record store and asked this cool guy at the counter:
"Hey, do you have anything by The Adolf Scents?"
and he goes
"What?"
and i say
"The Adolf Scents?"
and he goes
"uh... do you mean The Adolescents?"
At that moment a huge weight was lifted off my shoulders, my soul felt like it had been cleansed and God was not going to punish me eternally. I said
"Yes!"
He pointed me on the direction to the cassettes and i picked it up and there it was, the first Adolescents Album with "No Way", "Kids of the Black Hole", "I Hate Children" Etc. I had won, and later i realized that My Aunt's Boyfriend wasn't a cowboy in those tight jeans, but something oh so much cooler...
This tape changed my life.
- Dean
Posted by no age at 8:05 PM

Stories like this make me wish I grew to appreciate music in the pre-internet times (I'm 18). Making a cassette tape is just so much more personal than throwing a playlist on a CD-R, and worlds better than receiving music recommendations from a website/blog/last.fm/pandora. Music should be a social experience. Your story reminded me of that. Thanks.

great story. thanks for sharing

i mean, it's just a format, who is to say what is better or worse, it just is. your shit is going to be nostalgic and cool one day, it always happens

this is a great story, dean. hey, im from miami so we can't wait to see you on record store day! see ya there!

ryan - so pumped to go Miami! Actually about to get on a plane in 40 minutes.

Tecnomerengue - My aunts BF is long gone, i have no idea, but i remember he lived in Oxnard, CA. Nardcore!

That's such a great story! We're studying memoirs in my writing class right now & I have to write one. I've sort of been dreading it, but after I reading this I'm looking forward to it!

hahah adolf scents!
great story, i experienced a similar mess up when I was younger. Homemade mix-tapes are always deceiving.

makes me wanna go dig up some old tapes given to me by a girlfriend in high school--she changed my world musically and otherwise. mixtapes are time capsules...

Man this is so honest and for true- Its fucked up cause many Oi 'punk' bands in the UK got all tied up in the white nationalism grossness (4-Skins etc)- and when its hardcore siblings in the us would write songs like "guilty of being white" and "white minority" it would create a complex correspondence a superficial reading would render... well racist. Then you realize Ian idolized Bad Brains and they were mentors to him, and White Minority was produced by Spot, a black dude; and the message extends into their specific environment (D.C., L.A.) and a statement against racism that they dealt with in their own lives. You just gotta think for yourself! Nazi Punks Fuck Off! Ramble Times!

this is sort of lame but who gives a fuck anyway. im 16 and i live in england so and i got nouns by you guys like a year ago or so and it was like this whole new thing to me and like scared me a bit. after a while i got more and more into it though and wanted to find out more bands like yours. i looked throuugh like the booklet in the cd and saw the picture with all the casseted in it an decided to goodle some of the bands in it that i never heard of. i think it was adolescents and shit but anyway now i listen to loads of different punk and stuff that i wouldnt have found if it wasnt in that booklet. pretty lame really. but also a pretty good thing.

fuk man i had so many tapes that were the most valuable items in my universe...i had nowhere else to turn to for those vital jams....man is the bastard/dystopia tape...dead kennedys/minor threat tape...heroin/godheadsilo/milhouse tape...i rocked the shit out of my first adolescents cd it was a live compilation with all of their songs. fried my brain with that and human =garabge cd. i remember being a brown little indian kid and feeling weird about rocking out to "guilty of being white" and getting stoned and listening to minor threat... formats are quite different today but i totally agree that the emotional resonance can still be the same...at shows i see the same faces on kids today that me and my friends had when we were all sweaty and screaming "life's been swell now i wanna die!" in the belly of the pch...same shit different days man...